This is in part a tribute to our ram, Rojo, perhaps a eulogy is a better word. He had a kind of grandeur with his huge horns and yellow eyes, and he was the smartest animal on my little farm. 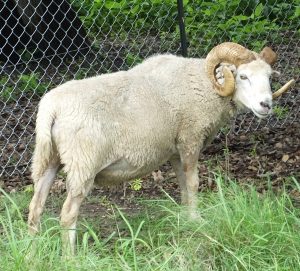 The word sheep is associated with being a mindless follower. And stupid. Like so many things, this turns out to have been wrong and work at the University of Cambridge reveals that sheep have intelligence equal to monkeys, rodents and score higher than humans in some tests. Living with sheep for the past six years, I am not surprised scientists find sheep capable of advanced learning, are able to map out their surroundings and can, perhaps plan ahead.

I had to laugh at a ‘test’ administered by a Professor Jenny Morton: sheep were shown yellow and blue buckets to find out how long it would take them to learn that food would always be in the same colored bucket. It took the sheep seven tries, the same number of times it took monkeys and humans to solve the same problem. When the color of the food buckets was switched around, the sheep quickly adapted. And when color and shape were introduced together, the sheep quickly learned color was irrelevant and shape was the key to the location of the food. Professor Morton wrote: “This is a really sophisticated rule change and is generally something that humans take some time to learn. Mice and rats can’t do it at all. Marmosets take longer than the sheep did to learn while Rhesus monkeys are quicker.” http://www.telegraph.co.uk/news/science/science-news/8335465/Sheep-are-far-smarter-than-previously-thought.html All of this is a citified way of saying what shepards have probably known for hundreds of years.

Not that Rojo did not have his faults. He had that clunky sheep shape, especially with his winter wool—and skinny legs. But he could move like lightening. I was on the ground twice before I knew what had hit me. Once, when I was nudging some small chickens away who were pecking my multicolored socks and another when I was carrying a bucket of food. I don’t think he ever used full power, just a ‘pop’. A half grown calf knocked me over in the barn one day, quite by accident, and I imagined the calf and Rojo saying to each other, “These things go down easy!” I have walked many steps to go around the pasture where the ram was grazing and armed my guests with a stick in case Rojo took it into his head to charge them. But the wobbliest new born lamb could safely walk right up to him and get a gentle sniff of acknowledgment.

One would want to theorize he was a bit wild, not really domesticated. But he, in fact, exhibited the neonatal earmarks of domestication; a shortened snout, permanent growth of his horns and the juvenile habit of begging for food. Scientist Stephen Budiansky’s controversial book The Covenant of the Wild, Why Animals Chose Domestication proposes that domestic animals picked us and not the other way around. This bends my mind. Sheep have been domesticated for as long as 6000 years, following humans, eating the leftovers from human fields and then exchanging human protection for lambs and wool and fertilizer. Perhaps a deal with the devil given the current practice of factory farming. Genetic changes are documented that control the dramatic physical and behavioral changes in domestic animals versus wild animals. Id p. x of preface.

It didn’t take wolves long to start following the big garbage trail left behind by humans. Ten thousand years later their dog descendants are a great evolutionary success story with their begging ways, soft ears, short snouts. We revere and respect the wild wolf. But in the United States there are perhaps 12,000 left, over half of which are in Alaska. There are 70 to 80 million dogs. For now, at least, dogs seems to have bet right. And who is in thrall to who? Anyone who has rushed home to let the dog out knows. I know as well, when on a freezing cold day in January I am breaking the ice so my stock can drink or taking the frost covers off the more fragile plants in my garden instead of curling up under my covers with my coffee. Yes, plants are a part of this story.

Michael Pollan in his wonderful book, The Botany of Desire theorizes that domestic plants actively sought out humans to care for them. Pollan writes, “Did I choose to plant these potatoes, or did the potato make me do it? In fact, both statements are true. I can remember the exact moment that spud seduced me, showing off its knobby charms in the pages of a seed catalog. I think it was the tasty-sounding “buttery yellow flesh” that did it. This was a trivial, semiconscious event; it never occurred to me that our catalog encounter was of any evolutionary consequence whatsoever. Yet evolution consists of an infinitude of trivial, unconscious events, and in the evolution of the potato my reading of a particular seed catalog on a particular January evening counts as one of them. “Evolution: tiny steps leading to survival. Bargains made; deals sealed.

We all know that flowers change colors and shapes to attract bees for the work of pollination. The apple trees and the bees engage in this coevolutionary bargain, food for the bee hive and a system of transport for the apple genes. Domestic plants spent thousands of years evolving ways to heal us, cloth us, intoxicate us and feed us. And the attraction is not all practical; the perfect beauty of flowers is a compelling draw to humans. I cut down spinach bothering a rose bush just last week because of the perfect color and form of the rose. Pollan says, Plants are so unlike people that it’s very difficult for us to appreciate fully their complexity and sophistication. Yet plants have been evolving much, much longer than we have, have been inventing new strategies for survival and perfecting their designs for so long that to say that one of us is the more “advanced” really depends on how you define that term, on what “advances” you value. Id Botany of Desire, PollanWe learned to make tools, to walk and talk. Plants invented photosynthesis and a large array of chemical compounds, some of which serve humans. And we serve them in return as anyone who gardens or farms is well aware.

This circle of service, the master/servant relationship is natural. Nature embodied. Who is master and who is servant is interesting. I know my Broccoli thinks I serve it; Rojo certainly thought he was the master. I will pick up my dear old ram in a few weeks from the abattoir (naturally the French word just sounds better than the American word, processing plant). He was lame, his teeth falling out, he was in pain but I’ll bring him home cut up for food for the dogs. If this upsets anyone, I’ll be happy to research the ingredients in modern dog food and I guarantee, they will not be very nice. What the dogs will be served out is a regal creature, so productive: 14 lambs, his last shearing made the wool rug for my son and his fiance’s wedding present and the green grass now growing in what was rocky hard ground is due to Rojo’s part in the marvelous ancient herbivore-pasture marriage.

1 thought on “Who adopted who? Cycles, circles, life just goes round and round”