People who grow plants are never really satisfied, not for very long anyway. We will complain about anything. The need for rain was on everyone’s lips all through a scorching hot August. When the blessed rain came, it came in sheets. And after several days the rain gauge read six inches…and the rain continued. Over the past three weeks, over 12 inches has fallen on to my little farm. Too much?

On the positive side rain fixes nitrogen in the air and that nitrogen is swept down into the soil along with oxygen during a rainfall. Plants and all living organisms in the soil relish this charged water. I have a heavy plant cover enriched by manure and compost and, at this time of year everything is ‘in growth’. So my plants soaked up the ‘excess’ water and my world is now emerald green; even the air looked green last week.

On the negative side, soil deteriorates in heavy rain, especially neglected soil. 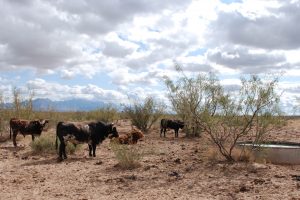 Pounded by heavy rain, the soil spreads out and its structure fails. Nutrients are leached away, including vitamins, potassium, calcium, magnesium, and sulfur. link  Plants and microrganisms can no longer thrive. Then, over time more rain washes dead or dying soil away leaving a barren rocky moonscape.

Even my treasured soil has been stressed by the recent heavy rain. I have been lending what comfort I can by adding organic matter–hay and manure and applying organic fertilizers rich in minerals. My allies are soil’s microorganisms. Bacteria. Fungi. Nematodes, Earthworms. They process minerals by ingesting and digesting them. They improve the soil structure, binding it together and enabling the soil to utilize water better. When soil is blessed with lots of these tiny creatures, a garden or pasture is alive. It breathes just like a human, using oxygen and releasing carbon dioxide. This makes plants happy. And their caretakers.

Degraded pastures are a common sight here, many uncared for because, among other things,  owners expect the land to be developed for new housing. And when heavy rain hits empty fields of rocky degraded soil, it runs off and the result is flooding.  Too much rain is a common story.

And an old one. Plato asked Critias to proclaim: “What now remains of the formerly rich land is like the skeleton of a sick man, with all the fat and soft earth having wasted away and only the bare framework remaining… Once the land was enriched by yearly rains, which were not lost as they are now, by flowing from the bare land into the sea. The soil was deep, it absorbed and kept the water in the loamy soil, and the water that soaked into the hills fed springs and running streams everywhere.” link

Too much is always about context.