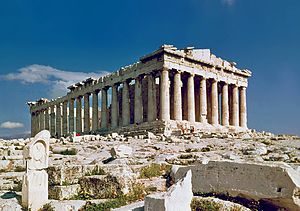 Historians have not spent much time looking at land use and its relationship to human civilizations. Much of the ground around me is very rocky, very degraded and I cannot find any reference about its history. I was told by one thoughtful and well-informed person that there used to be a couple of feet of soil on these hillsides and another thoughtful and well-informed person disagreed. I have no basis to judge, no contemporary diaries, letters or research that I can find.

What I can do is wonder at the repeated human destruction of natural resources that produce their comfortable lives. In a 1955 publication by the University of Oklahoma, Tom Dale and Vernon Carter point out that strong and wealthy nations have plenty of natural resources; but many poor and weak nations “once had plenty.” Topsoil and Civilization

Greece, of course, is fine example. Ancient Greeks produced educational methods and philosophy that remain unsurpassed. Their architecture, art and statuary are the envy of the world. Their well-equipped armies and navies are legendary. 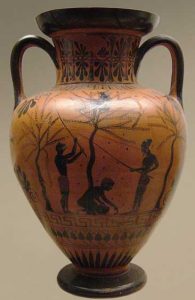 But with civilization, the land on the Greek peninsula and surrounding islands was spoiled; the extensive old Greek forests felled, large fertile grasslands degraded.

Like the rocky soil in my neighborhood, little has been written about Greek soil management. Historians are city dwellers according to Dale and Carter, so “…we must use modern soil science and logic to figure out what happened in Greece.” One historical mistake made is the assumption that Greek soil had always been poor. But modern soil surveys have revealed that, for example, in Attica, early on there was deep clay loam that created high yields; and, even on steep slopes, the soil was thin but fertile. Topsoil and Civilization.

Plato left us a contemporary record. He recognized the degradation of Greek soil as early as 360 B.C. He writes about the luxuriant forests and pastures of the past, then he gives a grim description of his present: “… in comparison of what then was, there are remaining only the bones of the wasted body, as they may be called, as in the case of small islands, all the richer and softer parts of the soil having fallen away, and the mere skeleton of the land being left.” http://classics.mit.edu/Plato/critias.html

The Greeks cut down trees for planting crops. They plowed up hillsides for crops. Then they overgrazed what was left of the pastures and found it necessary to clear more forestland for destructive, unmanaged grazing. The cleared land eroded quickly in the heavy rain and winds that hit during the winter. To get more production, the Greeks stopped using a system that left fields fallow in alternating years. Greek engineers began draining marshes, but eroded silt filled streams near the sea as fast as the engineers could drain them. Mosquitoes then descended carrying Malaria.

Seeking more food and a better life, emigration became a fact of life for the land-starved. One bright spot was that after 600 B.C., the Greeks found grapes and olives would grow well in lean, rocky soil and began exporting these crops or the refined versions of these crops, to other countries for cash. Unfortunately, most of the olive trees were chopped down by invading armies during the Peloponnesian War. By the time of this famous war, most arable land ruined, Greeks became traders, merchants and industrialists, the income of which allowed the purchase of food for Greeks from Egypt and Sicily. This is always a tenuous existence, and Greece declined to its present state, living today on credit supplied by European bankers, a mountain of debt and no natural resources.

The average life expectancy of a civilization is 800 to 2000 years, after which the civilization declines or is forced to move because humans ruin the environment that helped develop the civilization. Topsoil and Civilization The Greeks enjoyed about 10 centuries of power and plenty before they began their fall.

.Next week, Part 2, will feature China who amazingly managed to keep their soil, healthy alive and productive for 4000 years, 40 centuries.