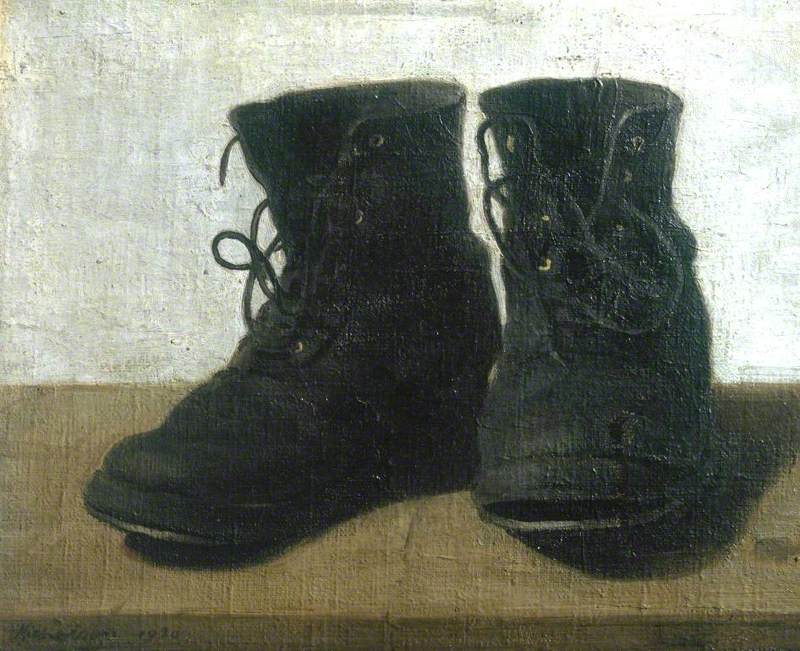 Last week I described the help that wildflowers can provide to farmers and gardeners. There are also long-time domesticated flowers that I would like to believe share a connection with humans–flowers that lend their chemical br 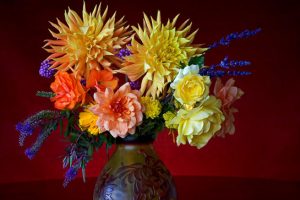 illiance to us. I would love to think, the Dahlia, for example, would use it’s nematode destroying abilities to assist me in my endless struggle to grow nematode-free potatoes. But I imagine the Dahlia is serving its own interests as are all other flowers; if they had any thought for my human well being, they would certainly do something about the wretched fire ants for me.

The Dahlia, like the flowers called Four O’Clocks, are native to Peru. Both plants were brought to Europe in the 17th century and used as ornamentals there for a hundred years before arriving here. Four O’Clocks attract and then poison Japanese beetles. So even though it can spread all over a garden and even though they are poisonous, I love them. I love any plant that can kill a Japanese beetle.

The ubiquitous Petunia was also ‘discovered’ by European explorers in South America, which seems to be the birthplace, not only of beautiful plants, but plants that repel insects.  The Petunia is described as nature’s pesticide. link  It repels aphids, tomato hornworms, asparagus beetles, leafhoppers and squash bugs. Petunias won’t grow in my soil, but I plan to put them in pots in the vegetable garden next year.

Another plant I will put in the vegetable garden next year is the chrysanthemum, which repels roaches, ants, Japanese beetles, ticks, silverfish, lice, fleas, bedbugs, spider mites, harlequin bugs and root-knot nematodes. Originating in Asia, chrysanthemums were written about lovingly by the Japanese as early as the 7th Century. The only thing I hold against the plant is that it is boring–it’s everywhere for months in the fall. And pyrethrum, commonly used in many insecticidal sprays, is derived from chrysanthemums. Pyrethrum is bad for all mammals and toxic to bees. I never use it. But I will plant chrysanthemums in the vegetable garden this fall, I just won’t eat them. 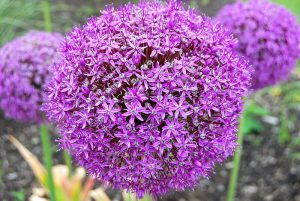 Another family of plants from Asia, considered to be a broad-spectrum natural insecticide, is the Allium. link I tried a planting of the giant allium last year without success. Like their cousin garlic, they repel slugs, aphids, carrot flies and cabbage worms. I’ll try them again this year.

My vegetable garden may begin to resemble the famous English ‘border’ garden made popular by the legendary English gardener, Gertrude Jekyll. She was an artist and her borders were her palette, shifting seamlessly from one season to another. She smashed the idea that plants should appear in neat rows or in geometric beds. Gardeners have been trying to emulate her plantings for over a hundred years. It’s hard to do. In the end a proper Jekyll garden looks natural, unstudied; it looks 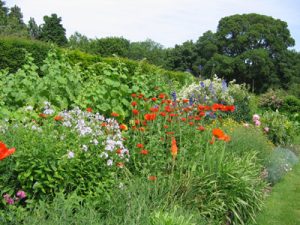 As I said last week, writing about wildflowers, I am tired of spraying my vegetables. And I will see if my flower friends can help. It’s an act of trust since I’ll be giving up a lot of vegetable ground to flowers. To fight my enemies. Miss Jekyll was no stranger to pests in her gardens. Her marvelous books describe her battles, but in Miss Jekyll’s hands, “how to” sound like poetry. A painting by William Nicholson of her boots appears above. She would have had no trouble at all with fire ants biting her feet.

A garden is a grand teacher. It teaches patience and careful watchfulness; it teaches industry and thrift; above all it teaches entire trust. Gertrude Jekyll 1843-1932