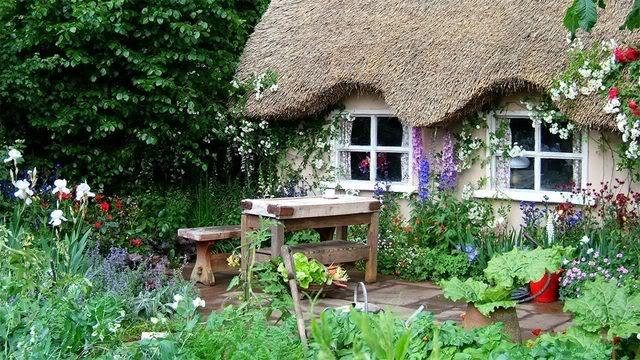 I enjoyed a happy childhood; my mother was considered a good cook and family meals were a pleasure most of the time–although not without drama on occasion. Herbs were entirely unknown to us. We always had a salad or a vegetable–home grown at times, but we did not eat herbs. No one I knew ate herbs.

It’s not as though humans had not run across herbs yet. In Genesis, we read that every “herb bearing seed” was gifted to humankind. Pliny the Elder praises mint for its marvelous smell and taste. He wrote about the herb 2000 years ago. Hamlet  speaks of fennel and rue and violets. We drank gallons of iced tea without fresh mint to flavor it. Why we didn’t include fennel and violets in our salads I’ll never know.

My favorite garden plants may be my herbs. I decided I had to grow them when I began reading about English cottage gardens, one of which is pictured above. Herbs and flowers and vegetables were just tucked in here and there without a grand plan. Many cottage garden plants self seed and skill is required to let the plants have their way when they pick some corner of the garden. 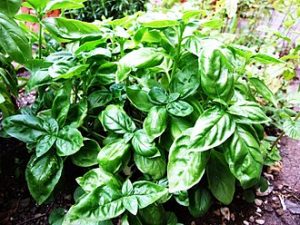 ith the hoe. It had popped up all over the garden for years, a tropical plant that loves hot summer days and hates the cold. It is native to Africa and Southeast Asia but is grown and used by cooks all over the world. Of course such a well-traveled plant has many names, basil being derived from Latin meaning kingly plant. It is like a king in the kitchen with it strong taste and scent; my son makes pesto each year, I love it raw or cooked, in salads, on bruschetta, any way at all. And there are dozens of kinds of basil: sweet basil, cinnamon basil, purple basil, anise or Persian basil, all worth growing.

An herb that does not mind the cold is parsley. It is a biennial and flowers every other year, then the seeds scatter across the garden and come up where they please. I had a lar 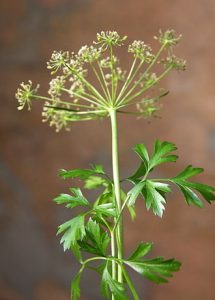 ge plant in the middle of the path last year. This year it is thriving at the feet of a grapevine. When temperatures dropped to 13 degrees in the winter I put a bucket over the plant and it was unharmed. Its leaves are very welcome in the kitchen during the cold weather. Parsley doesn’t mind hot summer weather either. I have found it to be delicious in salsa. The combination of tomatoes, onion, peppers and cilantro is grand; but cilantro likes it cool and is often gone by the time the tomatoes and peppers are ripe.

Cilantro also wanders all over the garden. It was by the holly last year. Cilantro is the Spanish name for the plant, coriander another name, although coriander is normally used for the seeds that form as soon as the weather heats up. The plant is native to Iran, but, like all beloved cooking herbs, it has been spread all over the world. Seed pods of the herb, called mericarps, were found in a Neolithic cave in Israel and over two cups were found in Tutankhamun’s tomb.

I will have to say that I love my thyme since it stays put. It forms a sort of homely little bush; it loves heat and doesn’t mind the cold. Mine has reliably come back year after year. 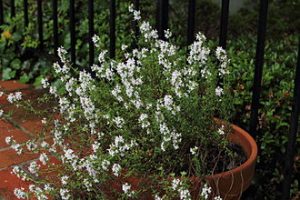 A friend whose thyme had spread too much brought me a beautiful clump several weeks ago and it is doing well. I would like this plant to cover as much of the garden as it likes, to go out of control. This herb also has a venerable past: it was used for embalming by the Egyptians, as incense by the the Greeks, used to flavor cheese by the Romans and used to cover bad smells by medieval Europeans. It’s loaded with health benefits. Bees love its flowers. Fungus doesn’t like it; bugs don’t bother it. Did I say I love this plant?

A distant relative of thyme and a member of the mint family, oregano, is also a perennial. 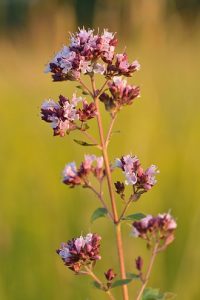 It grows into a large clump and its flowers are beautiful. High-end chefs use the flowers in their expensive dishes. It is reportedly hard to get an oregano plant that has ‘real’ oregano flavor. I may order Greek oregano and Syrian oregano this year from a reliable herb nursery. I understand that really strong oregano can numb the tongue. And the herb is the only one I know of that is reportedly better when dried. I will hang on to my trusty old oregano that has thrived in my hot, alkaline soil for years, it is beautiful in and out of bloom. I have been too lazy to dry it, but a big handful picked fresh is always welcome in my kitchen.

Mint is often the subject of complaints since it is very enthusiastic. it will cover ground fast and its tight roots will compete successfully with any ot 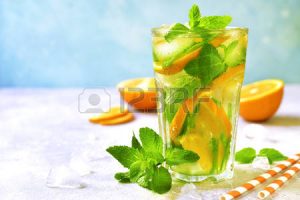 her plant in its path. But the weedeater keeps mine in bounds and I would never want to face a hot summer without it for my iced tea, lemonade and mint juleps. Or face winter without mint jelly. It is also famous for its health benefits, helping with good digestion, weight loss, relief from nausea, depression, fatigue, headaches, asthma, memory loss, and skin care.

Rosemary has just as impressive a list of health claims; it is said to be good for us: boosting memory, improving our moods, reducing inflammation, relieving pain, protecting our immune systems, preventing premature aging. I grow it because it tastes good, looks good and smells divine. The Egyptians, Romans and Greeks considered the herb to be sacred. And the name? The Virgin Mary is said to have spread her blue cloak over a rosemary bush with white flowers and rested there. The flowers turned the familiar beautiful blue and the herb became known as “Rose of Mary.” 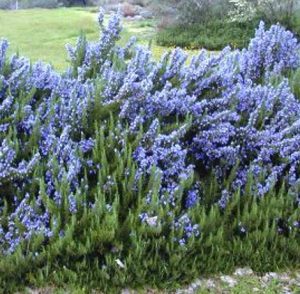