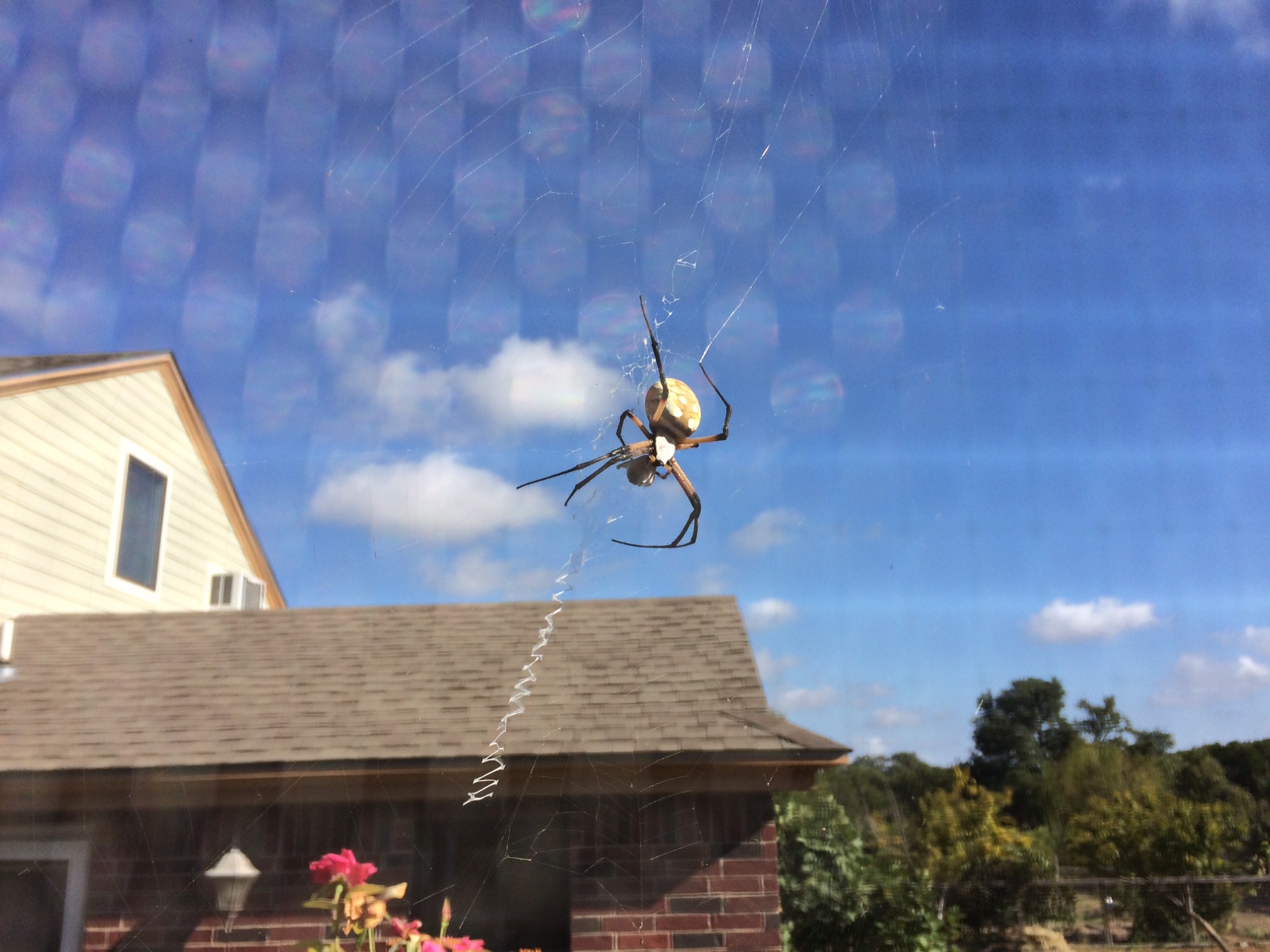 This large spider is currently hanging just outside my screen porch. She is huge, her body perhaps an inch in width; her legs, each two inches long. She has a sac of baby spider eggs beside her that she appears to be watching over. Yikes. I have stared inconclusively at the Texas spiders listed on the wonderful website Spider ID .

My best guess is that the spider might be Larinioides cornutus, the Furrow Orb-Weaver.

The coloring is about right and the time of year is right. I dunno. The natural world is so complex, we can just barely get our minds around small parts of it. When she appeared, spiders had been on my mind. We have been warned lately to watch out for poisonous snakes and spiders. The extremely dry and hot August weather has forced them out of the dark places where they live — to search for food and water. Death is extremely rare from spider bites, so I am trying not to kill every spider I see.

We are not a food source for spiders: they attack only when threatened. And while ALL spiders have poisonous venom; they are teeny and we are big. And there is an antivenom available for every imaginable spider according to Arachnid enthusiast Michael Noell. He says one has to really try hard to be bitten by a spider and anyone who manages to get bitten and then is foolish enough not to seek medical help should receive a Darwin Award. link

Only two kinds of spiders can make us very sick and in rare instances kill us: the Widows (Southern, Northern, Western, Black and Brown) and the Brown Recluses. Other spiders, like bees, can create a sting that may be complicated occasionally by an allergy. The Black Widow is horrible with a red hourglass on her stomach. Equally creepy is the Brown Recluse. It has six eyes that sit in three pairs on the spider’s back in the pattern of a violin.

As a child, I loved E.B.White’s, Charlotte’s Web and I have a life-long prejudice in f avor of spiders, especially literate ones who write in spun silk and save pigs. Anyone who hates spiders should read this book; it might take a couple of hours, but they would be saved from a form of human silliness. Spiders eat roaches, earwigs, flies, moths and mosquitoes. And aphids. Also fleas; fleas that have spread typhus and the bubonic plague. They are beneficials. Not that rational thought informs our prejudices: bubonic plague or no, in European literature, spiders have not fared well. For example, spiders eat Hobbits. Well, the giant spider Shelob tried to do so. But since Sam killed Shelob, that spider problem is quite dead.

In Ancient Chinese culture the spider was called “ximu”, that translates to happy insect. If a spider dropped down from the ceiling, it was deemed very lucky–as though the spider had dropped from heaven. Many Southwestern Native American cultures embrace a Spider Woman as a powerful helper and teacher; the Hopi creation story includes a Spider Grandmother weaving her webs. Goddesses in Sumeria and Ancient Egypt feature spider forms spinning webs. An African folk hero, Anansi, takes the shape of a spider and is the spirit of all knowledge. David, chased by King Saul hides in a cave and a spider spins a web over the opening, saving David.

But no matter how positively worldwide cultures see the spider, there is a creep factor. Even for me. I understand Ron Weasley completely when he says, “Why spiders? Why couldn’t it be ‘follow the butterflies?'” Harry Potter and the Chamber of Secrets by J.K. Rowling.

It has rained hard for two days: sheets of water poured from the roof. The gossamer web of my big spider remains just beyond the porch screen, not only entirely intact, but still beautiful. The faithful mother clings right beside her eggs, her vigil entirely uninterrupted by the thunder, the lightening — the deluge. The natural world is beyond us. We are obviously over our heads when we wring our hands and prefer butterflies to spiders.