Traveling by train last weekend, I saw field after field of corn, about waist high, growing without a single weed in sight. 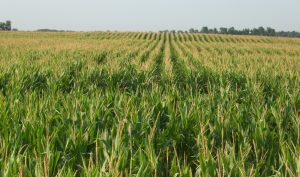 I am a little grumpy about all this corn since I planted eight hills of it and have two plants up–both about ankle high. I put in a hybrid, bought at the grocery store, that I imagine has been bred to require lots of commercial fertilizer. Modern corn varieties absolutely love petroleum-based commercial fertilizers. Production skyrocketed after WWII. In 1947 the huge munitions plant at Muscle Shoals, Alabama, stopped making explosives and finding themselves with lots of leftover ammonium nitrate, started making chemical fertilizer. The world quickly followed.

Michael Pollan tears into the modern use of corn in a lively series of articles written almost ten years ago. http://michaelpollan.com/tag/corn/ Pollan says the descendants of the Mayans who have described themselves as The Corn People are mistaken.

We are The Corn People.

Pollan writes “…the great edifice of variety and choice that is an American supermarket rests on a remarkably narrow biological foundation: corn. It’s not merely the feed that the steers and the chickens and the pigs and the turkeys ate; it’s not just the source of the flour and the oil and the leavenings, the glycerides and coloring in the processed foods; it’s not just sweetening the soft drinks or lending a shine to the magazine cover over by the checkout. The supermarket itself–the wallboard and joint compound, the linoleum and fiberglass and adhesives out of which the building itself has been built–is in no small measure a manifestation of corn.”

Tom Dawson at the University of California-Berkeley tests hair strands which reveal the amount of corn in the carbon of any given person. In a piece for CNN, Dr. Sanjay Gupta had his hair tested and he revealed that 69 percent of the carbon in his body came from corn.  http://www.cnn.com/2007/HEALTH/diet.fitness/09/22/kd.gupta.column/

Dawson says we are like walking “corn chips.” The, mostly invisible corn in our diets comes from more than eighty million-acres of corn; Pollan describes is as a ‘second great lawn.’  And Pollan complains that “… it’s too bad we can’t simply drink petroleum directly, because there’s a lot less energy in a bushel of corn (measured in calories) than there is in the half-gallon of oil required to produce it.” Ethanol comes to mind but that is another story.

The production of corn comes with costs to our finances, our environment and to our health. Corn is highly subsidized by my tax dollars. It costs more to produce than is sells for and I help make up the difference although profits from corn are in the billions. Much of the acidity in our rain, the algae clogging our waterways and the agricultural contaminants that result in dead zones on land and in water come from our millions of acres of corn. Our health suffers as well, the epidemic of obesity and diabetes may be related to the use of ultra refined corn products.http://michaelpollan.com/tag/corn/

Then there are the factory farms. 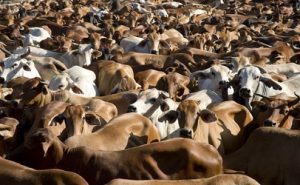 Herbivores evolved to eat grass; corn gives them stomach pain which requires antibiotics to keep the poor souls living until slaughter. Not that I am advocating any form of vegetarianism; that requires plowing up river banks, cutting down forests, transforming prairies — at the cost of destroying biodiversity (wild plants, animals and insects). Biodiversity has declined by more than a quarter in the last 35 years; perhaps over 50% since 1970. http://wwf.panda.org/about_our_earth/biodiversity/threatsto_biodiversity/. In part this destruction is to provide the seeds, nuts, oils and soy for a non-animal diet. Poor corn; it’s not the only problem.

Excess is the problem. Corn was just another grass plant, called teocintle by Meso-Americans 10,000 years ago.They grew what they considered a gift of the gods in every color: yellow, red, purple, brown and orange; they grew ears a few inches long and ears several feet long. Corn loves change. It loves being bred and re-bred and it may love genetic modification. Like the Mayans we love to play with corn’s genetic elasticity; we genetically modify it to survive herbicides and corn can live where everything else dies. Glyphosate (Round-up) kills everything it touches; except genetically modified corn. Gallons of the herbicide are poured on farmland each year to make life nice for this spoiled baby of a plant. Author Betty Fussell calls corn a genetic monster. https://www.washingtonpost.com/news/wonk/wp/2015/07/14/how-corn-made-its-way-into-just-about-everything-we-eat/?utm_term=.93f9ed9e1b05

It is fanciful to think my corn can sense my ambivalence; it may not like being called a monster. It is more likely I don’t care for it as well as the large and healthy tomato, potato and onion plants, baby it like I do my broccoli, cabbage and cauliflower. I did not even go to the trouble of ordering corn seed that liked my practice of feeding with manure and compost.

As a child I was teased for loving corn so much. It is sad that this wonderful food, one of the best parts of American summertime barbecues, doesn’t like me and I’m not too happy about it either most of the time– well, of course, buttered with a lot of salt, hot off the grill, that’s a different thing altogether. 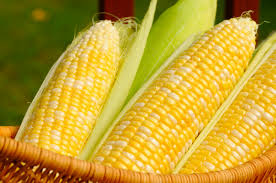