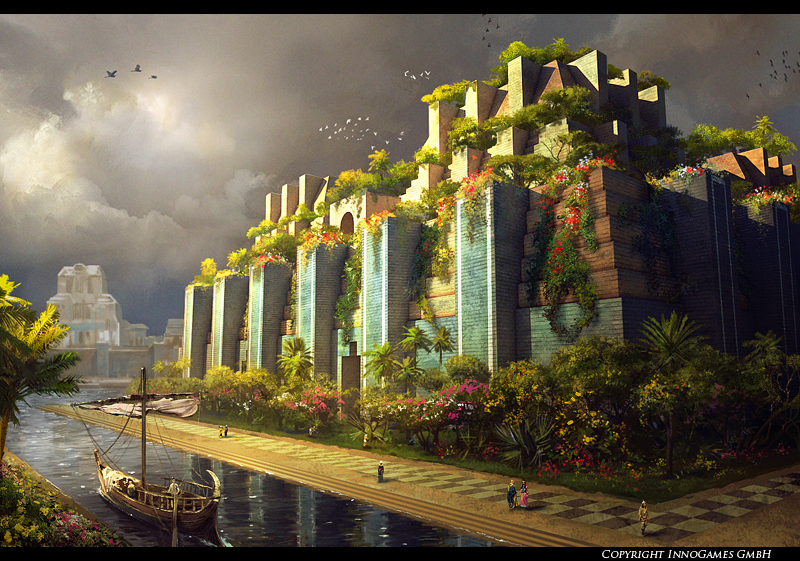 When we decide to make gardens, sometimes a kind of madness creeps in, a single-mindedness that results in, for example, the beautiful Hanging Gardens of Babylon built in Iraq by Nebuchadnezzar II in 600 BCE to please his homesick wife. Historians tell us that evidence of pleasure gardens in Mesopotamia dates back 6000 years or so; but I am skeptical that humans have not always had the desire to shape the beauty of nature for their enjoyment and consolation.

Gardens are temporal and even a garden considered to the one of the Seven Wonders of the World can be left unrecorded and only available to us through the imaginations of artists. The illustration above is my favorite depiction of the Hanging Garden; it looks lik 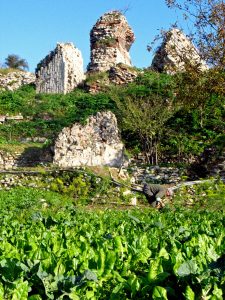 e a happy place, just the thing to make a woman longing for home make peace with a new world.

Gardening in relatively nearby Turkey was also an ancient practice. Enjoying the then-rich soil and availability of water, market gardens flourished for 1500 years. Large parts of Istanbul were planted with fruits and vegetables for the urban populace. These gardens, called bostan, were vast and faded away in the middle of the 20th century as demands of population growth squeezed out the famous strawberries, lettuce and figs to make way for human habitation.

Ancient gardening in India still amazes the world. The famous Mondore Gardens of Rajasthan were created by the flower-loving migrants from Central Asia who settled in Northern 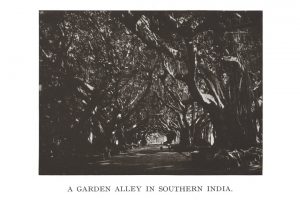 India after they fell in love with the Palash trees, covered with red flowers, and other exotics. They became devoted to the brightly colored lotuses that grew wild because of the abundant water that flowed from the Himalayas. Southern India?  A dozen famous names occur throughout our literature; for example, Shalimar, a household word–stunning with trees and water features. The grand garden alley here makes it clear that the  single-mindedness, the madness to create perfection apparently extended through many generations in India.

The gardens of Japan are so different from ours in their construction, yet my garden contains a surprising number of Japanese cultivars. The Japanese gardeners practiced botany at its highest level. Ancient Japanese gardens were first described in 720 AD in the Nihon Shoki, the first book of Japanese history.

In the spring of 74 AD, that book tells the story of the Emperor putting carp into a pond and rejoicing; the animation of fish are now always a part of a Japanese garden. Not long after, another Emperor expanded the idea to a lake where he could take his favorite concubine to feast and bask in the beauty of the combination of water and plants. I have never toured a Japanese garden that did not contain a water feature.

As esoteric and, perhaps out of reach, Japanese gardens are, ancient Roman gardens are easy and friendly. The typical middle class Roman home included a garden and one we Americans can relate to. They did not use lawns, a very recent form of gardening madness. Their gardens were located in a courtyard in the middle of the house, very green and fragrant with herbs the Romans used for cooking. Bringing nature in–using it. It’s in our DNA; it’s part of being human. 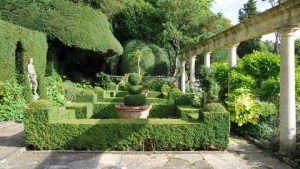 “If you have a garden and a library, you have everything you need.” -Cicero