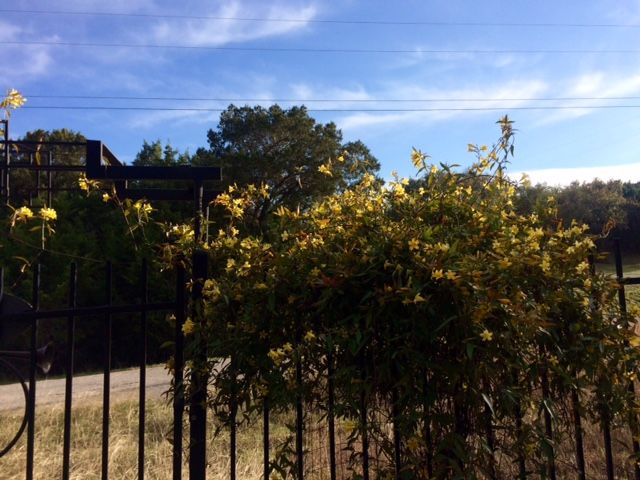 Failures mean little to dedicated gardeners. I have planted jasmine a half dozen times in the last half dozen years. Star Jasmine. Carolina Jasmine. And any other jasmine I came across. All dead now except a Carolina Jasmine lighting up my fence right now for the first time as pictured above. It’s like a Las Vegas slot machine with room for only two pictures, the one in my head and the ‘reality’. If I just keep pulling the handle, I can get the two pictures to match. Sometimes.

Another vine that lives in my imagination but not in m 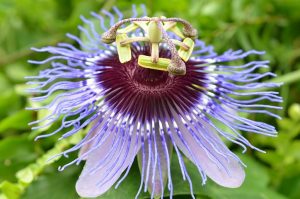 y garden is the native, Passion Vine. Its flowers are drop dead beautiful and appear to have come from 1970’s movie about an alien invasion. I ordered the vine from an acclaimed nursery that specializes in native plants, I purchased another from a highly rated local nursery and I have planted it from seed. All  dead–even though native plants are supposed to grow well here. I put in my fourth try yesterday; from the Home Depot. What the heck.

Planting natives is a good idea, but even better is to avoid plants that are not hardy in one’s growing zone. I just cut down a Meyer Lemon tree. It was just too cold for it, but I thought I had a perfect sheltered spot on a brick wall facing south where it would be warmed by the winter sun. Exceptionalism. Not good. English garden writers are very enthusiastic about cheating the winter weather with warm southern walls. But the Arctic winds drop down south, through the plains, and hit my garden hard. Every year, without fail, I have several days of temperatures in the teens. I have protected the lemon tree from the bitter weather with old-fashioned hot Christmas lights, Planketts, plastic piping with a heavy plastic overlay, the same piping with plastic and a Plankett. Even with the protection, it was just so ugly after its winter trials; although, to its credit, it would put on six feet of beautiful citrus leaves each summer. But it was right outside my kitchen window so the three months of ratty, cold-damaged branches was just not worth the two lemons I got each year.

I also tried Olive trees. There are several large commercial Olive gardens near me. One owner said that every few years a ‘blue norther’ comes down and he loses a third of his trees. He considers that a cost of doing business. The costs to my garden are three out of four trees dead. One very large one died of root fungus, cold killed two others. The one Olive I have left is of French, not Italian origin and better suited to my climate. It is supposed to grow to about 20 feet, but it never gets bigger than its three feet. The weather dropped to 13 degrees two months ago and the little tree did not seem to mind the cold. It’s tough and really charming. It reminds me of the dwarf in Game of Thrones.

Failures aside, I am just not happy with the fashionable idea that I should plant only natives; I am a little skeptical about the labeling. Who decides? When I lived in the North daylilies, originally from Asia, were much loved. They are dependable and beautiful; bullet-proof. I thought they would love my southern garden. Shortly after I moved, I ordered three pricey premium plants from a southern nursery that specializes in daylilies. My chickens ate them; the buds, the leaves, the tubers and the roots on the tubers. 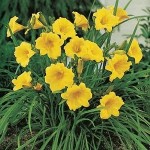 Nevertheless, when a neighbor offered a clump of daylilies after her spring cleanup, I drove right over to get them. I pulled the big clump apart and wound up with twenty or so starts of the Daylily, Stella D’Oro. I have put my new daylilies in the vegetable garden where the chickens are not permitted to go; I am hoping the plants will thrive and that my intelligent and resourceful birds will not find another feast. Hope.

Near the daylilies is a very special rose, Pioneer Spirit, purchased at least seven years ago from the ‘Antique Rose Emporium’, a nursery only a 100 miles or so from my house.

I am a great fan of Vita Sackville West, an English grande dame, whose garden writing has inspired my friends and I for decades. She grew rose bushes 10 feet tall and her favorites were the cabbage roses with their hundreds of petals. Bred at Texas A&M in the 1990’s, my Pioneer Spirit is supposed to be 10 feet tall and its flowers are said by the rose purveyor to mimic famous luxurious roses of the past. The rose is a modern version of the grand traditions of the great gardens of England. While I have lots of good clay soil, this poor rose wound up near an underground vein of caliche and began suffering from Chlorosis shortly after I planted it. Chlorosis is an iron deficiency caused by alkaline soil that locks up nutrients including iron. I have tried fix after fix and last fall I told the homely three -foot tall rose with its yellow and brown leaves that I would dig it up in the Spring.

In preparation for my new and trouble-free imaginary plant, I piled hay and manure from my new bull in a ring about 18 inches high around the rose, expecting lovely compost after a winter of freezing and thawing. Last week I ran across a new expensive soil drench that promised a cure for Chlorosis. I thought I’d give the rose one more year and walked out with my bucket of ‘cure’ to find the plant with lots of healthy new green leaves and only a few yellow ones. Wow. I applied the drench but now will never know whether the manure/hay mixture might have cured the plant without help.

Gardeners. Even when we succeed we drive ourselves crazy.