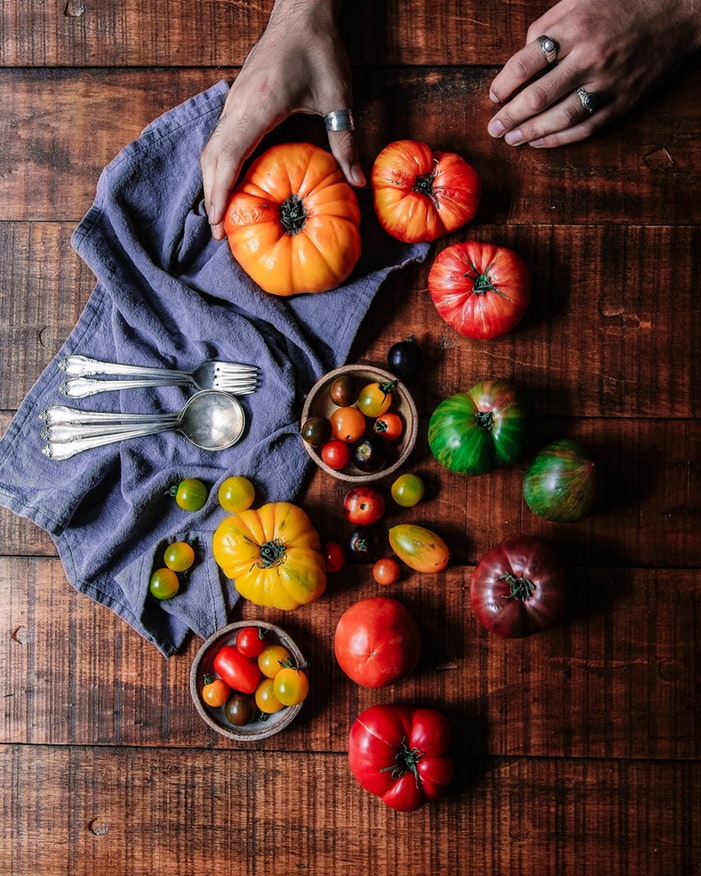 When the Spanish Conquistadors found the Aztecs cultivating tomatoes in the city of Tenochitlan (now Mexico City), they did not see the round red ones we buy today in our supermarkets. Tomatoes had grown wild and been enjoyed in the Americas for a thousand years: yellow, orange, pink, purple, green, black, white, mottled, striped and of every shape and size you might imagine.

Many of these colorful and unusual tomatoes were entered in a tasting contest at my local Farmer’s Market last month and were truly delicious. But I have not had great results from my attempts to grow ‘heirloom’ tomatoes. My 2017 tomato crop was really dismal so I opted for hybrids this year: tried and true red slicers, Romas and cherry tomatoes. 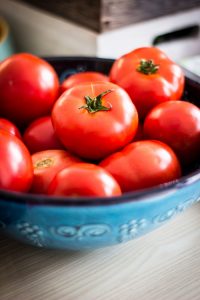 Taking the excellent advice of a fine tomato grower and friend, I planted three plants in mid March. The theory is that, IF there is not a late frost, my tomato crop would be well on its way before the hot weather hit and slowed production. There was a hard frost a week later. I put in three more plants but a hard frost the first week of April killed those as well. Gambling. Gambling with weather. A sucker’s game. Nothing looks worse than a tomato plant killed by frost, blackened leaves, hanging like a rag bag. Sad. Nevertheless, I put in my remaining six plants the second week of April and have had a good year.

Tomatoes have always been associated with crazy. Embraced early in Southern Europe tomatoes were called a ‘love apple’ in France where they were imagined to be an aphrodisiac. The Italians were an exception to this ‘crazy’ and, in the 16th century, they quickly added tomatoes to the oil, garlic and herb toppings they used on their flatbread–creating an early form of what we call pizza.

Northern Europeans believed the tomato to be poisonous for years. This is not really entirely crazy since all parts of the tomato plant, with the exception of the ripe fruit, is poisonous. The tomato evolved from the prehistoric plant Nightshade millions of years ago in South America. The nightshades are quite a family; including the potato, eggplant, tobacco and chili peppers. One has to admire the early humans who were hungry enough to sort out which parts of which plants were ‘safe.’ Attempts to make tea from tomato leaves led to some reports of death and the toxins tomatine and atropine appear in small quantities in unripe tomato fruit. I may rethink my affection for fried green tomatoes.

Weirdness seems to follow the tomato. It was classified as a fruit until late in the 19th century to avoid taxation, which makes one think the tomato lobby must have had considerable power. In a bizarre little twist, the Supreme Court stepped in and declared the tomato a vegetable. And what could be weirder than the transformation of a soft, flavorful food into one that that is currently picked when it’s almost green, then boxed and transported thousands of miles, then placed into an ethylene air bath to turn it red for sale in our supermarkets.

Our love affair with tomatoes has not been slowed by the its questionable quality in our marketplaces. It is the state vegetable of New Jersey and Arkansas, the state fruit of Ohio. I don’t think I ever ate a salad as a child that did not contain tomatoes. I have started tomato seedlings for a fall planting this year. This is an act of love since the chances of producing a tomato before frost are marginal. But my tomato gardening friends insist the pleasure of a home grown tomato in November is worth the risk of a few seeds. And I think I will gamble next spring and grow a green striped tomato. Risk. Reward.