To have a garden that is less work. Great idea. The most famous ‘no work’ gardener, and a controversial one, is Ruth Stout. cite  Another garden writer, Steve Solomon offers his own controversial advice–often in opposition to the venerable Ms. Stout. cite

Gardening is always controversial, it’s the natural state of it. Gardeners are imagined by non-gardeners to be serene, benevolent souls; in fact, the desperate fight with insects, the vagaries of maintaining good soil, the ever-losing battle with the weather create a productive but opinionated person.

Ask 10 gardeners a question: get 15 answers. So all beloved garden writers are surrounded by disagreement, and I think they love it. Ruth Stout, born in 1884 is said to have been a women’s rights activist and smashed saloons with Carry Nation in Prohibition-era Kansas.  She was an advocate of working au natural  in her Connecticut garden that produced prodigiously. She was active in her garden until her death at age 96.

Stout is most famous for what she called ‘her method’ of gardening–basically laying down 8 inches of hay throughout the garden. Her ploughman failed to show up one year and she began a process of no-till planting with the hay application and describes her success eloquently, if somewhat stridently, in her books. Her books are fun; for example How to Have a Green Thumb Without an Aching Back. In a magazine interview she said she did not “plow, spade, sow a cover crop, harrow, hoe, cultivate, weed, water or spray. I use just one fertilizer (cottonseed or soybean meal), and I don’t go through that tortuous business of building a compost pile.” Fun, right? link

Many gardeners find the heavy mulch attracts slugs and other insects along with mice. Steve Soloman agrees. He gardened in the Pacific Northwest and was a fan of mulching with a layer of very fine soil. I wrote about Chinese gardeners using this technique earlier this year. link My soil is far too heavy to create the powdery texture that succeeds as a mulch. Gardeners in the South complain that this kind of mulch does not stand up to 100 degree days.

Solomon’s bare soil was hoed constantly and very lightly tilled. His garden produced very large quantities of food for his family. Part of the reason for his success was that he used only the highest quality seed. Solomon, who founded the Territorial Seed Company, set the standard for quality seeds in this country. In his books, he is adamant that manure, mulching and composting are not enough to create a garden with food that contains good nutrition at harvest. He writes that poor soil, stripped in his climate of nutrients by heavy rains, creates poor food for animals, the manure and compost are then poor and the food produced poor in nutrients. To avoid this outcome he liberally used a good organic fertilizer, lime, cottonseed meal, kelp, and rock phosphate or bone meal.

Some of Solomon’s most difficult advice to gardeners is that some ground in the garden should be fallow once every three years. One year of planting, the next year in cover crops and the third year entirely at rest. I thought this would be hard, but have found it easy to just avoid planting certain areas every year or so. I lay down a really thick layer of hay on my fallow ground, since my prairie grasses are very enthusiastic and their roots go down 10 feet or so. There is no way I could just till them up–and I don’t till anyway. In this rainy year the grasses stay ahead of me on the fallow ground and the non-fallow ground. It seems I am laying down more hay every time I go out. I follow Stout’s mulching method for most of the year. It doesn’t create any additional insect problems for me and keeps the ground cool through the summer. Mulching with hay is not no work for me; but it works well for my plants. In the spring, I leave the soil bare for a while to let the sun warm it. I don’t really mind hoeing during that time.

If you are going to garden well, you need about 15 minutes every single day. Then you can sip a cool drink and ‘front porch garden’ the rest of the day. Some years, it is easier to go out daily. If those 15 minutes stack up then, it’s ‘work’. No way around it. 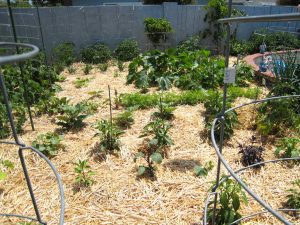