Plantswoman is enjoying some summer traveling and will return with new post on June 27th.

Pollen, the sticky stuff of life for flowers, grasses, bees and butterflies offers us a window into the past of the Sahara Desert. Scientists have discovered pollen that is thousands of years old. It reveals that the Sahara was once a paradise full of trees. Why this land of tropical trees, lush vegetation and many, many lakes turned to desert is being studied. link Disagreement rages. For example, Gavin Schmidt of NASA believes that 8000 years ago the tilt of the Earth changed from 24.1 degrees to 23.5 degrees. Dr. David Wright believes humans were a factor and that grazing and agriculture destroyed the lush green world and led to desertification. link

Deserts are beautiful, they just don’t help us breathe. Trees and plants absorb carbon dioxide and give off oxygen. And the

y do more than just provide the oxygen. Like any good set of lungs, trees filter pollutants and clean the air for us. A new study estimates that the Earth has three trillion trees. These trees are represented in the graphic to the left in the dark green bands. Another study estimates that 400 billion mature leafy trees exist and these big trees produce enough clean oxygen “… for the lifetime of ten people each season! There are 400 billion trees, 6.7 billion people on Earth — every person has 60 trees.” link

I am pretty happy having 60 trees making oxygen for me. I don’t think this is a question of a crisis so much as an issue of caretaking. I thought I had lost a chicken but she appeared several days ago with baby chicks. This is a creature not generally admired for intellect, but she understands caretaking. There are 5 or more hawks circling during each day; she keeps her babies near the crawlspace of the porch or near a deep opening beneath a rose bush. She covers them with her wings when the dogs or other chickens threaten. I have no idea where she takes them at night. It poured rain two nights ago, the sky was alight for hours with lightening with attendant thunder. The chicken was out the next morning taking care of her dry, healthy babies scratching for bugs.

How do we take care of our trees and forests? I have planted at least dozen trees and take great care of the 40 or so mature trees on my property. I never buy anything made with exotic wood; I have given up live Christmas trees.  I gripe here often about clear cutting forests. Will this save my 60 trees? Will that preserve my share of clean oxygen? I have no idea.

WIRED magazine recently ran an article entitled “All the Trees Will Die, and Then So Will You” that described, among other things, the terrible insect and disease damage presently ravaging trees. link We will soon be seeing the summer wildfires raging across thousands of acres of forests. 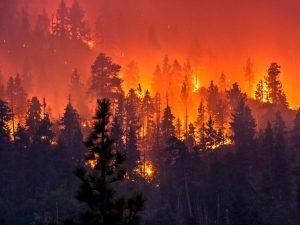 Caretaking of forests has separated successful countries from the unsuccessful. link Jared Diamond in his book Collapse: How Societies Choose to Fail or Succeed  describes the Japanese campaign to preserve their forests initiated 300 years ago. Most of this small island full of people remains forested. Diamond contrasts the success of Japan with Haiti and North Korea where deforestation has led to land erosion, poverty and famine. He also relates the well-worn tale of Easter Island, where the inhabitants lived prosperous lives; so prosperous that they were able to carve statues 13 feet high weighing 14 tons. 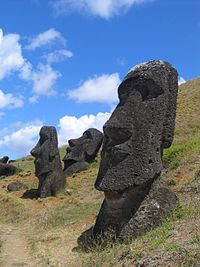 They cut every tree. The deforestation of the island led to decline, led to a few suvivors living a feral existence in caves eating rats and mice and possibly engaging in cannibalism.

In the end maybe we should wonder who is taking care of who. I believe trees are sentient being and perhaps from their point of view we are their lungs and not the other way around. We are certainly providing carbon dioxide in record levels with our bodies, our cars, our industry. I like to imagine trees taking care of themselves. I imagine they will survive the recent human and insect plagues. They have been on Earth for 370 million years and have probably survived worse.