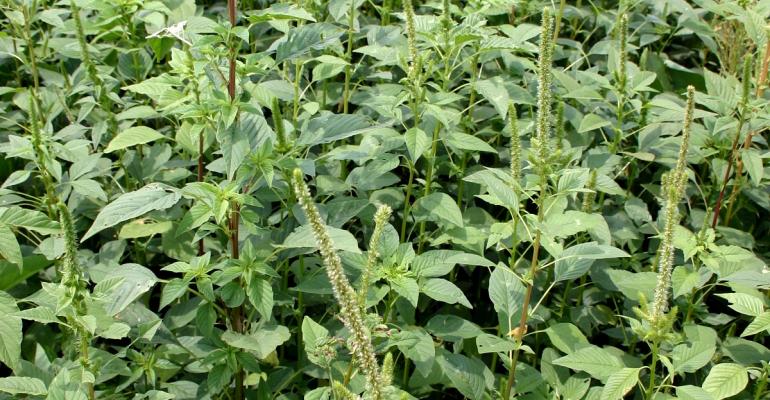 Humans dream up ways to kill unwanted plants. Plants, who are great chemists, dream up ways to resist the onslaught. For example the herbicide, glyphosate (Round-up), kills by targeting a key protein in plants. Most plants have two copies of the gene that makes this protein. Glyphosate is no longer effective against pigweed because the plant has evolved five to 160 copies of this key protein. It fights back with its own genetic modifications.

Carelessweed is another name for pigweed and is the name my grandmother used. I like the old fashioned name a lot since the arrogant weed could care less what humans want. A dozen pigweeds surrounded each of my six tomato plants while I was away on vacation. I just keep pulling pigweed up and it always, always reappears. It is my enemy.

One pigweed plant can produce half a million seeds, according to a June 2018 article in Scientific American. Each seed is loaded with modern “genetic machinery” to wage and win its war with humans. Some large scale farms have been forced to hire laborers to handpick or blowtorch the weeds. link

Other experts have found that, in good growing conditions a pigweed plant can produce not just half a million seeds, but  1.5 million seeds. And pigweed needs only about two weeks to produce all this seed after flowering. link

I included the names of the herbicides above since you might want to check the labels on product you use to kill weeds in your lawn or garden. They may not work anymore. Of course, the big problem is with big farms–massive fields of soybeans and corn. Agribusiness genetically modifies corn and soybeans so that they are no

t killed by herbicides. The plan was for the herbicides to kill all plants in a field other than the genetically modified corn or soybeans. It is entertaining to me that weedy plants are developing their own genetic modifications to resist the poisons. Poor Big Ag farmers, they have to keep using more and more of old herbicides and are always on the lookout for “new” and usually more toxic herbicides so they can stay ahead of the plants.

The costs are high– the money expended, the health of the soil, the health of the farmers spraying the chemicals, the health of consumers. We pay the costs yet we may not win the war. There is a “considerable chance,” according Science magazine that “the evolution of pest resistance will outpace human innovation.” Weeding the old-fashioned ways may be the solution in the end.

Amazingly, the leaves, stems and seeds of pigweed are edible and highly nutritious! The leaves can be cooked like spinach or other greens. link I am not enthusiastic about eating it. Just as i am not inclined, unless very hungry indeed, to eat snakes or bugs. Even if they are wildly nutritious. I just don’t like the idea of eating my enemies.